In December 2008 satellite operator Intelsat, announced a joint venture with a South African investor group led by Convergence Partners and Altirah Telecoms, that will utilize project financing to build and launch a new satellite into the 33º East orbital location, ideally positioned to serve the African continent.

The satellite, was called Intelsat New Dawn and would feature a 28 C- and 24 Ku-band 36MHz transponder units payload optimized to deliver wireless backhaul, broadband and television programming to the continent and was expected to enter service in early 2011. The satellite is operated and marketed as part of the global Intelsat fleet.

Over half of the satellite’s capacity was already been reserved for several leading continental companies, including Vodacom, Gateway Communications Africa, Bharti Airtel, Telecom Namibia and Gilat Satcom.

Intelsat-28 was built by Orbital Sciences, Corp. (Orbital ATK – Northrop Grumman), and is based on the GEOStar-2 satellite platform.

New Dawn would take over from Galaxy-11, which was relocated to 33° East in November 2008, where it is used to complement and back up the ailing IS-802 until the planned arrival of New Dawn in 2011.

Intelsat New Dawn was successfully launched on April 22nd, 2011, in a dual launch with Y1A for satellite operator YahSat from UAE on an Ariane 5ECA rocket booster, operated by launch operator Arianespace from the Kourou Space Port in French Guyana.

Following its launch, one of its antennas failed to deploy, prevented use of part of the C-band payload, reducing the spacecraft’s operational lifespan to 12 years.

In November 2012 the JV was terminated by Convergence Partners, Altirah Telecoms and a consortium of South African investors and sold the group’s interest in the New Dawn to the project’s initial majority shareholder Intelsat. 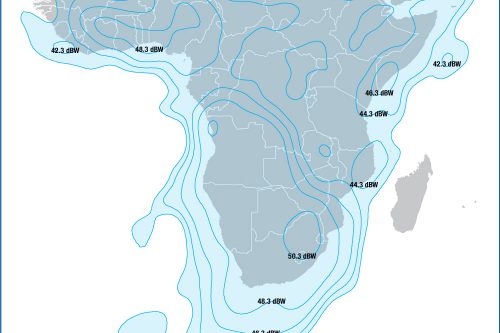