Orbital ATK Inc. was an American company specialized in the design, manufacture and launch of small- and medium- class space and rocket systems for commercial, military and other government customers. It was headquartered in Dullus, USA.

On April 29th, 2014, Orbital Sciences announced that it would merge with Alliant Techsystems to create a new company called Orbital ATK, Inc. The merger was completed on February 9th, 2015 and Orbital Sciences ceased to exist as an independent entity.

Orbital Sciences was best known for launching the Cygnus cargo spacecraft to the International Space Station (ISS). ATK was best known for creating solid rocket boosters for the space shuttles. Since the February 2015 merger, Orbital ATK works on flight systems, defense- and satellite systems. The 1.9 billion USD deal with the space agency requires the company to fly eight unmanned cargo missions to the ISS using its Antares rocket and the Cygnus capsule.

Orbital Sciences had a setback when one of its spacecraft exploded just after the launch on Oct. 28th, 2014, likely due to suspect Russian engines in Orbital’s Antares rocket. The flights resumed on a United Launch Alliance (ULA) Atlas V rocket in December 2015. A March 2016 cargo delivery marked the final launch on a ULA rocket.

Orbital ATK was one of two private companies that hold  a contract with NASA to fly unmanned cargo missions to the International Space Station.

Orbital was founded and incorporated in 1982 by David W. Thompson, Bruce Ferguson and Scott Webster, three friends who had met earlier during their studies at the Harvard Business School. In 1985, Orbital procured its first contract for providing up to four Transfer Orbital Stage (TOS) vehicles to NASA. In 1987, the seeds for the ORBCOMM constellation were planted when Orbital began investigating a system using LEO satellites to collect data from remote locations. In 1988, Orbital acquired Space Data Corporation in Arizona, one of the world’s leading suppliers of suborbital rockets, thereby broadening its rocket business and manufacturing capabilities.

This acquisition was followed by the opening of a new facility in Chandler, Arizona in 1989 to house the company’s expanding rocket business.

In 1990, the company successfully carried out eight space missions, highlighted by the initial launch of the Pegasus rocket, the world’s first privately developed space launch vehicle. Shortly following the successful Pegasus launch, Orbital conducted an IPO in 1990 and began trading on the NASDAQ stock exchange.

In 1993, Orbital established its current headquarters in Dullus, Virginia followed by the acquisition of Fairchild Space and Defense Corporation in 1994. In the same year, Orbital successfully conducted the inaugural launch of the Taurus (currently renamed as Minotaur-C) rocket.

Orbital’s acquisitions continued throughout the 1990s including the acquisition of CTA, Inc. in 1997, a company having designed and built the first geostationary ‘lightsat’ under contract to Indonesia for Asia’s first Direct Broadcast Satellite (DBS) television broadcast program, providing an entry into the fast-growing GEO communications satellite market.

In 2007, the first interplanetary spacecraft built by Orbital, Dawn was launched on an eight-year, three-billion-mile journey to the main asteroid belt between Mars and Jupiter. A major milestone in the company’s history was in 2008 when it received a long-term NASA contract to provide cargo transportation services to and from the ISS with a value of approximately 1.9 billion USD for missions from 2011 to 2015.

Orbital is currently on-track to deliver on this contract with its Cygnus spacecraft and Antares rocket following the success of Cygnus Orb-D1 and Cygnus CRS Orb-1.

In 2010, Orbital announced its acquisition of the Gilbert, Arizona-based satellite development and manufacturing unit from General Dynamics to complement its main satellite manufacturing facility in Dulles, Virginia.

On April 29th, 2014, Orbital Sciences announced that it had entered into a definitive agreement with Alliant Techsystems to combine Orbital and ATK’s Aerospace and Defense (A&D) Groups to create a 4.5 billion USD, with 13,000 employees. The new company was called Orbital ATK, Inc., and would serve U.S. and international customers with leading positions in the markets for space launch vehicles and propulsion systems, tactical missiles and defense electronics, satellites and space systems, armament systems and ammunition and commercial and military aircraft structures and related components.

In 2018 Orbital ATK revealed new details about their new OmegA rocket it is developing over the last three years in an effort to take U.S. Air Force launch contracts away from United Launch Alliance and SpaceX. OmegA was developed under a three-year, 250 million USD cost-sharing partnership with the Air Force.

In 2020 Northrop Grumman discontinued the development of the OmegA rocket after the U.S. Space Force picked United Launch Alliance and SpaceX as the military’s two top launch contractors over the next seven years. 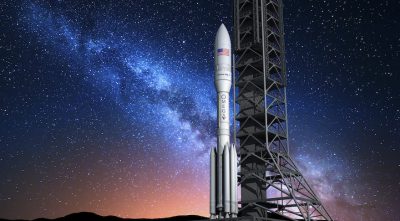