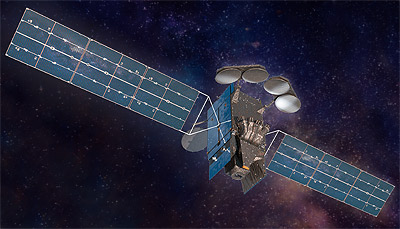 In February 2020 Satellite operator Intelsat ordered the new Intelsat-40e High-Throughput geostationary communications satellite (HTS) with Space Systems/Loral (SS/L). The satellite will provide Intelsat customers across North and Central America with flexible, high-throughput, “coast-to-coast” coverage. The satellite is built on the SSL-1300 platform and carries a high throughput C-, Ku, and Ka-band payload for Intelsat’s Epic system. The satellite will use both electric and chemical propulsion for orbit raising and will be operated with all-electric propulsion on orbit for a lifespan of 21+ years (!).

Additionally, the satellite hosts NASA’s TEMPO (Tropospheric Emissions: Monitoring of Pollution) earth observation payload. TEMPO is a UV-visible spectrometer that will detect pollutants by measuring sunlight reflected and scattered from the Earth’s surface and atmosphere. The resulting data from TEMPO will be used to enhance air-quality forecasts in North America, enabling the more effective early public warning of pollution incidents.

Intelsat selected launch operator SpaceX for the launch of the Intelsat-40e/TEMPO satellite that is scheduled for launch in 2022. This is the second launch for Intelsat and SpaceX. In 2017, SpaceX launched Intelsat-35e, a satellite currently providing high-throughput coverage for Intelsat customers in portions of North and South America, Europe and Africa.